Dept. of Civil and Environmental Engineering, University of Strathclyde, Glasgow

It is estimated that only 1% of the 200 million cubic metres of sediments1 that are dredged from Europe’s ports and waterways are reclaimed, with the remainder disposed of at sea or in landfills. As periodic dredging is necessary to maintain navigation in ports, canals and rivers, reduction of this sizable waste stream is focused on finding beneficial uses for dredgings, including through their incorporation in erosion and flood control projects.  The European Union (EU)-funded SURICATES2 Project is a collaboration between port authorities, research institutes, SMEs and universities to demonstrate dredged sediment reuse for key infrastructure projects in Northwest Europe.  Through pilot trials it seeks to address the physical, environmental and economic barriers to effective sediment reuse and to implement tools for sediment managers to quantify the impacts and benefits of different reuse options.

Under the 2008 EU Waste Framework Directive, all dredged sediment is classified as waste. Although there are exemptions that allow dredged sediment to be spread on land for agricultural improvement, in most instances geotechnical properties need to be improved through treatment to render it suitable for use as a construction material. For example, the water content of the sediment slurry as dredged must be greatly reduced through de-watering at source or through treatment. Another important sediment criterion is its particle size distribution (PSD). The current reuse option is typically for washed aggregates but this is only viable for sandy sediments.  The ratios of different size fractions, such as silts and sands, largely control the geotechnical properties of a soil, such as compaction, loading and cohesion. Dredged material often produce fine soils that are poorly graded and less suitable for construction.  A second consideration is the total organic carbon (TOC) content of the dredgings.  This is derived from leaf litter, vegetation and other organic inputs which can contribute to elevated TOC values in dredged sediments. High TOC values will affect long-term sediment stability as carbon slowly oxidises with a corresponding reduction in soil volume. Finally, contaminants present in sediment dredged from areas with historical industrial usage may require remediation or be managed as contaminated waste.

In Scotland, the University of Strathclyde and Scottish Canals are SURICATES project partners, focussed on the beneficial reuse of sediment dredged from Scotland’s canal network.  The University of Strathclyde has specific expertise in waste soil management in the Circular Economy, unsaturated soil characterisation and an active Sustainability and Environmental Studies MSc program. Scottish Canals are a public corporation responsible for operating and maintaining Scotland’s canal network with a strong commitment to sustainable sediment management3 in line with the Scottish Government’s Zero Waste Plan4.

The canal network includes the Forth and Clyde Canal, which reopened to navigation in 2000 as a millennium project to stimulate economic regeneration along the route of the 200-year old canal system in Central Scotland.  This £78 million engineering project required the removal of thirty canal obstructions via new road bridges, locks, and the iconic Falkirk Wheel canal lift (Figure 1).

Sections of the canal network must be dredged at intervals to maintain navigation and the integrity of the canal infrastructure. Adjacent to the Union Canal in Falkirk a pilot study has been underway to recover dredged sediment removed from the canal to condition it for enhanced beneficial use. Six cells were constructed with a nominal total capacity of 450 m3 of wet sediment (Figure 2). Over the course of six weeks in the summer of 2019, sediment was dredged from the Union Canal at several locations around Linlithgow and transported to the site. The cells were constructed to promote passive dewatering of sediments while allowing various parameters to be collected over the course of the trial. Three of the six cells were sown with Reed Canarygrass (Phalaris arundinacea), which is tolerant of toxic soil5, to evaluate the benefits of phytoconditioning on dredged sediment. Other environmental criteria, such as total fuel consumption during construction and transport, were logged to allow environmental assessment to be modelled for this and other disposal/treatment options.  It is expected that the dredged sediments will be suitable for reuse in the Spring of 2020 and will be used for erosion control projects.

So, what are the practical applications of SURICATE pilot implementations? The overall goal of the project is to increase the volume of sediments that are re-used in Northwest Europe to 2.3Mt/year after 10 years through the replication of the pilot studies. This will be achieved by addressing the not inconsiderable geotechnical challenges in conditioning wet sediment and communicating the lessons learned from each pilot study to other sediment managers.  The economic modelling tool, which is in part derived from pilot study data, will further help decision makers evaluate the costs of different beneficial use options in preference to disposal.

Figure 1. The Falkirk Wheel which links the Union Canal to the Forth and Clyde Canal. 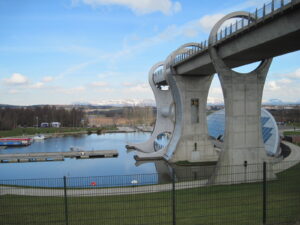 Figure 2. View of treatment cells with the Union Canal in the background. 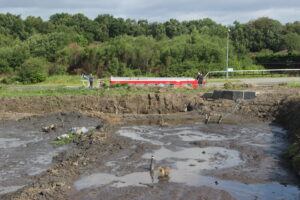 Figure 3. Surfaces changes in the cells from August to November 2019. 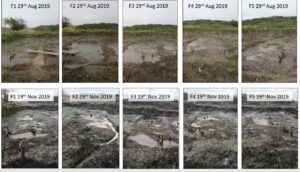